Scientific textbooks show a diagram of the big bang and the subsequent expansion of the universe. So it must be true! Right?  Someone took the time to draw a diagram, and lots of people copied and reproduced it, so it is a proven scientific fact, right? Well, lets look into that. 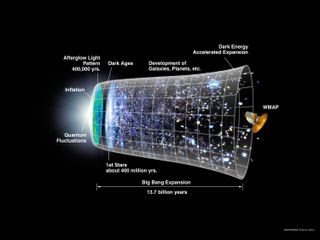 First, let’s consider just the basics about the who, what, when, where and why questions. People (secular atheistic scientists) claim they “know” the big bang occurred 13 Billion years ago. But who or what caused it, why did it occur, and where was the Bang? If it occurred, shouldn’t we be able to tell WHERE? In fact, scientists have been looking for the answer to that question for decades! Here is an explanation written by Marcus Woo from the site Livescience.com:

So apparently, since they could not find where the center was, they have decided there was no bang, or maybe the bang was everywhere at once. But first there was nothing, then EVERYTHING appeared ALL AT ONCE from nothing… EVERYWHERE.

In fact “everything and everywhere just appeared all at once from nothing” is a quick summary of what science has to say about Origins.

There was nothing, and then there was everything. You can see that Scientific Cosmology has no answers.  Sounds more like a lot of scientists gossiping about things they frankly admit (among themselves) they don’t understand. So to cover their lack of understanding, they say maybe there is a missing dimension, or maybe you (and I) are just not smart enough to understand. Some even say our entire universe appeared from another dimension… (as if that is any sort of a scientific explanation!)

Woo continues, “So far, theoretical ideas and observations — such as those of the cosmic microwave background radiation, the afterglow from the Big Bang — point to a remarkably flat universe. But cosmologists still aren’t sure if the universe is indeed flat or if the curvature is so wide that the universe only appears flat — similar to how Earth feels flat on the surface.”(1)

Did you catch that?  Now of course the meaning of flatness in cosmology is entirely different than the meaning of the same word in geometry.  Nevertheless, people used to think the earth was flat, and now cosmologists refer to the universe being “flat”.  But note the phrase “cosmologists still aren’t sure“… but wait! I thought scientists knew exactly when the Big Bang occurred and how hot it was and that it came about due to the famous Heisenberg uncertainty principle!

“That the universe has no center — and, by extension, no edge — is consistent with the cosmological principle, the idea that no place in the universe is special. Observations of how galaxy clusters are distributed and the cosmic microwave background reveal a cosmos that, when you zoom out far enough, does indeed look the same everywhere.  Throughout history, humans have wrongly thought we were at or near the center of the universe —whether that center was the Earth, the sun or even the Milky Way galaxy. But no matter how special we humans think we are, the universe has, so far, shown otherwise.” (1)

So let me get this straight.  There was a Big Bang.  But since there is no sign of where the Big Bang occurred, we just assume it’s hidden, or maybe it is curved or flat or in a different dimension. But nevertheless, Woo and the scientists somehow know that we are certainly NOT at it’s center? To further explain this, let’s go to another well know internet site that explains the Big Bang, Cosmology and the “inflationary universe”.

“Like dark matter, cosmic inflation (even if it is not actually proven beyond all doubt) is now usually seen as part of the standard Big Bang theory, and to some extent the two additional concepts rescue the Big Bang theory from being completely untenable. However, other potential problems still remain.“(2)

So you see, what we really have in the Big Bang is a “completely untenable” theory that must needs be rescued by any means necessary!  But anyway, the ONE thing you can be sure of is that it is all under control due to the immensely strong effects of dark matter, right? That invisible , undetectable , theoretical stuff that holds everything together and keeps the universe “flat” (keeps it from exploding into nothingness).

Or back to the original question.  Where is the center of the universe?  Here is info from the site spaceanswers.com:

“If you were around in the 1500s, during the time of the Polish astronomer Nicolaus Copernicus, then the answer to this question would have been the Sun. Obviously, despite how we see the planets and stars moving across the night sky, our star is not at the centre of the Universe. So what is?

Today astronomers believe that there is no centre to the cosmos. You might think that there must be a central point – after all, the Big Bang must have started somewhere? While great explosions of say, a bomb, do start from one point, the Big Bang that is believed to have created our Universe nearly 14 billion years ago was a different matter entirely and appeared to happen everywhere all at once – time and space did not exist before the Big Bang and so there was no point from where it could have erupted from.” (3)

If any of that makes sense to you, and explains where the universe originated… congratulations. Because scientists still don’t know. They really don’t have a CLUE!

Isaiah 66:2  “For My hand made all these things, Thus all these things came into being,” declares the LORD “But to this one I will look, To him who is humble and contrite of spirit, and who trembles at My word.”