We have previously discussed the scientifically discredited evolutionary “Tree of life”. It appeared for nearly a hundred years in texts as an illustration of how evolution progressed from one species to another. It suggests that humanity evolved from apes, which evolved from other lower life forms, and eventually from some single celled organism such as a bacteria or slime mold. It suggests mankind is just one of the many thousands of branches on the random tree of evolution. Here are just a couple of the hundreds of variations. 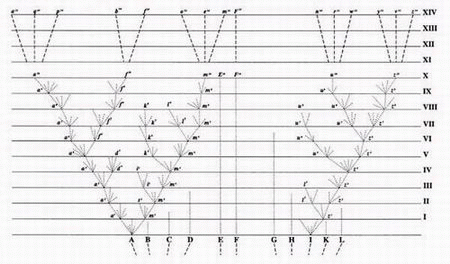 We showed that this imaginary “tree of life” has been totally discredited by scientific (not religious) means, such as archaeology, geology, paleontology and genomics. Proponents of evolution have tried to “improve” and “re-engineer”  the diagram hundreds of times, but to no avail.  It is finally being discarded by many who study evolution, yet it still appears in many recently published secular texts.  You see, even pro-evolutionary institutions like Berkeley admit that NS does NOT explain the origin of life, that evolution is NOT random, that evolution can (and supposedly did) occur RAPIDLY, and that evolution cannot explain morality.(1) Yet all these ideas would have been considered anathema to Darwin. Most are the antithesis of evolution.

Evolutionary biologist Eric Bapteste recently admitted that the project to build the tree of life is pretty hopeless, saying “We have no evidence at all that the tree of life is a reality“. (2) Or as stated by Michael Rose of UCM Irvine,  “The tree of life is being politely buried… What’s less accepted is that our whole fundamental view of biology needs to change.”(3)

As written by Dr David Raup, Dean of Science at the Field Museum of Natural History in Chicago, “We are now about 120 years after Darwin and the knowledge of the fossil record has been greatly expanded. We now have a quarter of a million fossil species, but the situation hasn’t changed much. The record of evolution is still surprisingly jerky and, ironically, we have even fewer examples of evolutionary transition than we had in Darwin’s time.(4) (Bold type added) When he states it is “jerky” that means animals suddenly appear fully formed in the geological strata… that sounds far more compatible with creation than with evolution!

To further explain I will quote evolutionist Richard Goldschmidt, who wrote: “The major evolutionary advances must have taken place in single large steps…The many missing links in the paleontological record are sought for in vain because they have never existed: ‘the first bird hatched from a reptilian egg.’”(5)

We have not yet examined the alternative view point, mentioned in scripture in which we (humanity) are viewed as branches of the one true vine.  John Chapter 15 verse 5 reads ““I am the vine; you are the branches. If you remain in me and I in you, you will bear much fruit; apart from me you can do nothing.” (6)

I have no intent to pursue this as analogy thoroughly here, except to say that how we view our origins has a great deal to do with how we view ourselves. Science, that is to say, true and intellectually honest science, is not incompatible with faith, or with the Bible. But the intellectually dishonest, secular atheistic, brainwashed view of science (more accurately called scientism) taught in our educational institutions now is an entirely different matter.

The “vine and branches” verse is traditionally viewed as referring to Christian Churches, ministers, and believers, who derive their life source and meaning from their connection to a living Christ.  However the verse is also applicable to the study of the sciences. I have stated before that the truest definition of Scientific study, is as follows; “Real science, unpretentious and unassuming is this, to investigate the wonders of Creation with all the powers of our God given intellectual capacity, and to maintain truth and objectivity at all costs.”

Certainly that definition is at odds as with current secular atheistic presuppositions, but we have proven many times over that the goal of secular atheism and scientism is NOT maintaining truth and objectivity.  It is focused rather on indoctrinating gullible youth into their atheistic, anti-God, Anti-Christ mindset.(7)

Many of the authors and originators of Scientific study (Kepler, Galileo, Newton, Linnaeus, and hundreds more) were Christians, and for hundreds of years we have seen our standard of living, and our standards of education moving forward at a steady pace.  But more recently scientific advancements have no longer been leading to increases in individual freedom, or an improved standard of living for society as a whole.   We have instead seen burgeoning technological advancements that have created an unbelievably wealthy class of billionaires while doing little to advance the condition of the billions trapped in poverty. And worse yet we have seen a dark curtain of spiritual and intellectual dishonesty descend on our campuses, our media, and our entertainment industry. I think it is fair to say that the current trends in science are not leading to the betterment of society and mankind nearly as much as they once did.

Perhaps, you say, that is a sociological or political question, not a scientific one. And certainly in one sense that is true.  But each is connected and intertwined with the other. The sociological phenomenon of secular atheism, for example, which is overtaking our campuses is highly dependent on the belief in and promotion of evolution.  So perhaps, just perhaps, Real Science, practiced in the setting of belief in a loving Creator, offers more hope and solutions than the pseudo-science of the secular atheists. Perhaps by reconnecting with “The Vine” also called “the way , and the truth and the life“(8), even science, cosmology, and our understanding of life itself will be greatly enhanced.

As written by Sarah Irving-Stonebraker of Western Sydney University, a convert from atheism, “Christianity was also, to my surprise, radical – far more radical than the leftist ideologies with which I had previously been enamored. The love of God was unlike anything which I expected, or of which I could make sense.”(9)

“Real science, unpretentious and unassuming is this, to investigate the wonders of Creation with all the powers of our God given intellectual capacity, and to maintain truth and objectivity at all costs.” ANM